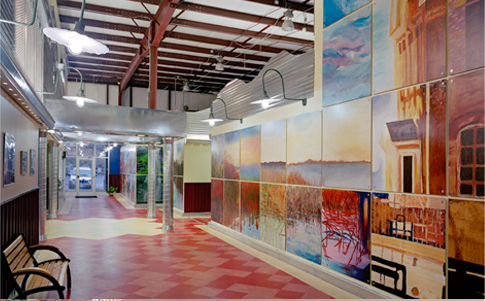 After months of hard work, long hours and selfless dedication on the part of those who built it, the Saugerties town hail expansion and renovation project was finally revealed to the public in a gala open house on Saturday, December 9. Town and village residents, as well as members of local and county government, packed the sparkling new digs to take tours, feast on munchies and generally bask in the glow of a job well done.

The old adage that “a little bit goes a long way” has never been more rapidly applied than to the renovation project, as the project, according to architect Janus Welton of EcoArch DesignWorks, PC in Woodstock, was done “on a shoestring budget.” The leanness of the budget was not the only challenge for Welton, who specializes in sustainable and environ­mentally friendly architectural design.

“This is a very cold, very dark and dank warehouse facility,” said Welton to the assembled visitors. “There was no human habitation in this facility. There was no light and no views. Our challenge was to transform this design wise into a pleasant and healthy environment.”

But Welton was confident that a transformation was possible. “As a very positive person, I know that I can transform anything,” said Welton, who previously worked with the Disney Imaginarium and the entertainment industry in Hollywood. “I’ve done a lot of warehouse work before…and we all had studios like this. To me, it was an exciting challenge and not a tough one in that respect.”

Indeed, Welton succeeded in her design goals. Welton transformed the 4,826 square-foot space into a fascinating Saugerties village streetscape that borders on the whimsical, with building facades fashioned out of steel mesh and corrugated metal attached to the walls. One can even pick out the distinctive arch of the Orpheum looming large just outside of the new conference room. Lamps also line the “streets” of the interior “village”.
Welton felt that die look and feel of the project was vital, as well, for the sake of the town’s economic future.

“This facility is the point of entry to our town….for all the new developers in the area to come in, and this is the first place they land,” said Welton. “It was important to me that we demonstrate our community values and to present an environment to them that would show our dedication to sustainable green and energy efficient architecture, something artistic that really reflects our town and the artistic nature of our community, and that we practice progressive development.”

Easy being green
All of these features may simply look aesthetically pleasing, but they were also created with an eye toward energy efficiency and “green” building practices. Welton said much of the renovations were either fashioned from natural materials, from the cork and linseed oil floors, to the storefront facades, which were constructed from recycled materials. Moreover, the addition features radiant heating that comes from the ground up, “the most comfortable type of heating available,” according to Welton. The renovations also include an airlock entryway to keep the cold and the heat out during the winter and summer months, as well as ample nature light to keep heating and electricity costs down.

Not only does the environment benefit from Welton’s design, but the town coffers, as well. Welton said that the town worked with the New York State Energy Research and Development Authority (NYSERDA), and thanks to their environmentally friendly measures, the town will be receiving money back for their efforts. Parks and recreation superintendent Greg Chorvas stated that with labor and building materials combined, the total cost of the project was $55 per square foot, and that “with those reimbursements…that $55 per square foot I talked about will actually drop.”

With a little help
The innovative renovation project would not have been possible, however, without the elbow grease of the town’s in house construction crew, according to Chorvas.

“[They] put in many tough hours,” said Chorvas. “When we were going full bore, we had two shifts going.”

Leading the crew were co-project managers Terry Valk and Kevin Brown, both of whom received a plaque for their hard work and dedication.

Although the project saw completion was completed “on time and within budget,” as Chorvas explained, the renovation wasn’t without its share of challenges.

“One of the biggest challenges that we faced…with this project was the volatile price market for construction related materials and supply and demand,” Chorvas said. “That volatile market resembled a yo-yo at times.”

In spite of the hardships, Chorvas said the project was “very, very rewarding for him.”

“The studio is a work in progress,” she said. “That will be where, as an independent producer and director, you’ll be able to come…and be able to actually film and produce a production live right here in Saugerties.”
But that’s not all that’s in store for Lighthouse 23. “After the first of the year,” Thornton said, “Lighthouse 23 will undergo another renovation. We’ll be taking over the back part of the studio and using it for broadcast space.”

The newly renovated space also features a new conference room, which town superintendent Greg Helsmoortel jokingly remarked should be renamed “Leeanne Thornton’s Office,” as she uses the room with a frequency of about four times a week.

Perhaps one of the most stunning features of the renovation project is the massive mural depicting a portion of the Saugerties landscape as well as the iconic Saugerties lighthouse. Welton came up with the idea to offset the fact that the warehouse is completely bereft of natural views. Town board member and local artist Nancy Campbell enthusiastically took the project and ran with it. The mural consists of 73 panels and features the work of 65 artists of every level, from preschoolers to high school students to professional local painters to Boy Scouts and students at the Woodstock Day School. According to Campbell, “the participating artists were given a small 4×4 inch color photograph of their section to work from.”

The photos were taken by David Radovanovich and Kraig Anderson. Golden Paint Company donated the artist-quality acrylic paint used in the mural. The mural not only enlivens a dark, windowless space in the renovated warehouse, but shows that “art is for everyone, everywhere,” said Campbell. A plaque with every artist’s name will be displayed in the addition.

The project may be stunning to those of us who simply see the town hall on a fairly irregular basis, but what are the new digs like for those who have to work there everyday?