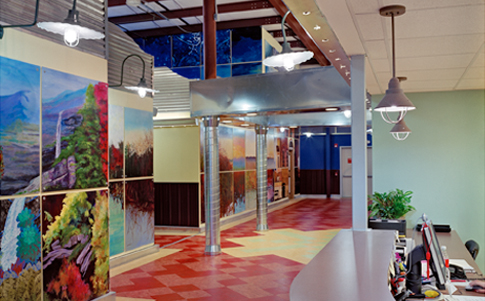 The town of Saugerties building and zoning departments will be moving from then cramped quarters in the town hall to their spacious new building.

Janus Welton of EcoArch DesignWorks, PC in Woodstock designed the 4,826-square-foot space, with several offices and a conference room.

Welton and EcoArch previously designed the Ram Dass Library at the Omega Institute in Rhinebeck, and the Rip Van Winkle Golf Club in Palenville, and the site concept for Belleayre Golf and Ski Resort.

“We’re almost done with the renovations,” said town supervisor Greg Helsmoortel. Construction began in back in February, and all of the work is being completed “in house,” said Helsmoortel, which means town employees are doing the actual renovating.

If the interior of the new space looks vaguely familiar, it’s not your imagination. The renovations echo the streetscape of the village of Saugerties, with building facades fashioned out of steel mesh and corrugated metal attached to the walls. One can even pick out the distinctive arch of the Orpheum looming just outside of the new conference room. Lamps line the “streets,” and soon, park benches will be installed to complete the illusion.

Adding to the hometown feel is a mural of the local landscape, including the Saugerties lighthouse, each panel completed by a different local artist. “The idea behind the mural was to bring the outdoors in,” explained town council member, artist and mural project manager Nancy Campbell, “to brighten a windowless corridor with the community’s vision of its town.” Welton came up with the concept of the mural. “It consists of 73 panels,” Campbell said, “which were given out to around 65 artists — some did multiples — who were also given a small four-by-four-inch color photograph of their section to work from.”

The photos were the work of David Radovanovich and Kraig Anderson. According to Campbell, “artists range from professionals to preschoolers,” and two of the artists, Kerensa Demerest and Juanita Wilsey, are town employees.

The renovations, which came with a half-million dollar price tag, will be paid for by a Bond Anticipation Note [BAN], said Helsmoortel, which did not need voter approval. “If you go longer than five [years], you’re subject to permissive referendum,” he explained, “but it’s something we feel we can pay off easily. Well, not easily because tax payer money is never easy, but it’s something that we feel that we don’t have go into a long-term obligation. Bonding is usually much longer, and we don’t feel we need a long term obligation to do this.”

Helsmoortel is also confident that increased building and planning fees will help offset the cost of the project. Kandy Harris