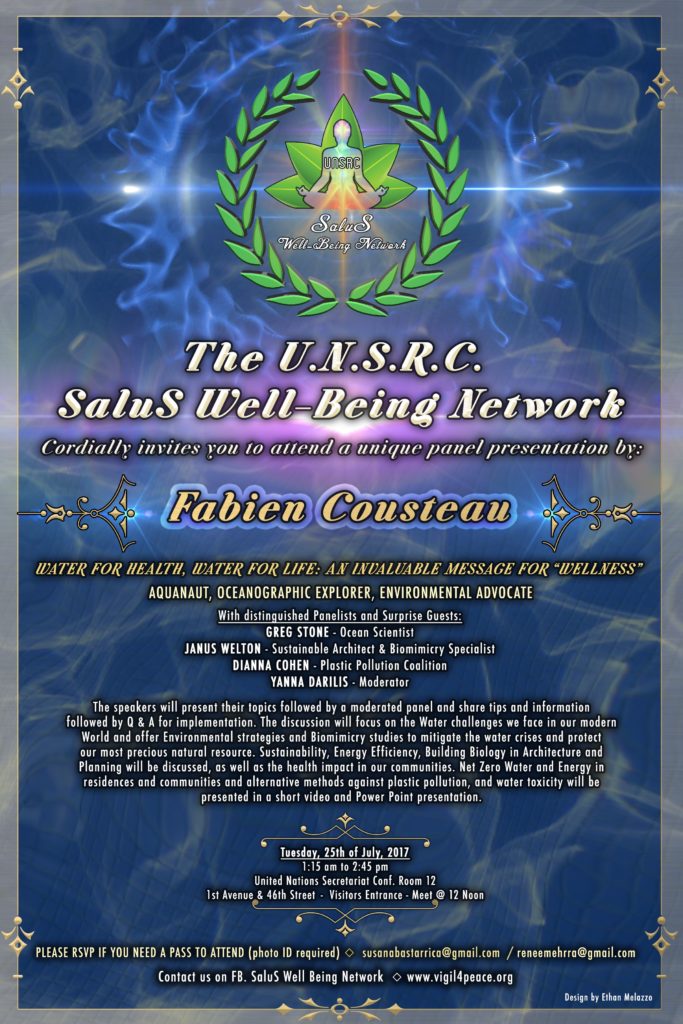 Cordially invites you to attend

WATER FOR HEALTH, WATER FOR LIFE: An invaluable message for “Wellness”

With distinguished Panelists and Surprise Guests

The speakers will present their topics followed by a moderated panel and share tips and information followed by Q & A for implementation. The discussion will focus on the Water challenges we face in our modern World and offer Environmental strategies and Biomimicry studies to mitigate the water crises and protect our most precious natural resource.  Sustainability, Energy Efficiency, Building Biology in Architecture and Planning will be discussed, as well as the health impact in our communities. Net Zero Water and Energy in residences and communities and alternative methods against plastic pollution, and water toxicity will be presented in a short video and Power Point presentation.

The Panel Discussion will feature:

Aquanaut, Oceanographic Explorer, Environmental Advocate and Founder of Fabien Cousteau Ocean Learning Center. As the first grandson of Jacques-Yves Cousteau, Fabien spent his early years aboard his famous grandfather’s ships, Calypso and Alcyone; and learning how to scuba dive on his fourth birthday. He is well known for his study of sharks and from 2000-2002, Fabien was an Explorer-at-Large for National Geographic and collaborated on a TV special aimed at changing public conceptions about sharks called, “Attack of the Mystery Shark,”. Then in 2003-2006, he produced the documentary, “Mind of a Demon,” that aired on CBS. With the help of a large crew, Fabien created a 14-foot, 1,200-pound, lifelike shark submarine called “Troy” that enabled him to immerse himself inside the shark world, providing viewers with a rare view of the mysterious and often misunderstood creatures. For the next four years (2006-2010), Fabien was part of a multi-hour series for PBS called, “Ocean Adventures” with his father, Jean-Michel Cousteau, and sister, Céline. Inspired by his grandfather’s famous 1978 PBS series, “Ocean Adventures”. On the following years, and as a member of multiple cause-driven and charitable boards Fabien has been working with local communities and children worldwide to help restore local water ecosystems. In June 2014, Fabien and his team of aquanauts embarked on Mission 31, the longest science expedition to take place at Aquarius, the world’s only underwater marine laboratory located in Florida. Fabien’s Mission 31 broke new ground in ocean exploration and honored the 50th anniversary of his grandfather’s original underwater living experiment (Conshelf Two) by going deeper, longer and further, while broadcasting each moment live on multiple channels exposing the world to the adventure, drama and mystique of what lies beneath (www.mission-31.com). Currently he is working on multiple projects and dedicates much of his time to the Fabien Cousteau Ocean Learning Center (“OLC”), his non-profit 501(c)(3) founded in 2016 to fulfill his dream of creating a vehicle to make a positive change in the world.

Is an ocean scientist and explorer with over 10,000 dives using submarines, SCUBA gear, underwater habitats and robotics. Greg works to find ways for humanity and the ocean to co-exist and support each other in the modern world. He was part of the genesis of the Ocean Health Index and works on sustainable fishing, aquaculture, climate adaptation and seamount ecology. He’s given TED and Davos talks, been featured in documentaries for Discovery and National Geographic. He’s authored hundreds of publications including for Nature, National Geographic, and four books, one a National Outdoor Book Award winner and his most recent co-authored (October, 2017 release), SOUL OF THE SEA IN THE AGE OF THE ALGORITHM has received advance praise from Dr. Jared Diamond, ”This book, by two of the world’s leading ocean experts, will grip you with its bold account of humanity’s history with the ocean and how to solve the huge problems we have created.” Greg’s numerous accolades and professional associations include the Explorers Club, Pew Fellowship for Marine Conservation, National Geographic Hero, Diver of the year from Boston Sea Rovers, the order of Kiribati Medal, the U.S National Science Foundation/Navy Antarctic Service medal, and the top industry diving award, the NOGI, from National Academy of Underwater Arts and Sciences. Greg is Chief Scientist for Oceans at Conservation International and Special Advisor on Oceans for the World Economic Forum, and on the boards of Pacific Rising, The Phoenix Islands Protected Area Trust (Chair) and Aqua-Spark. He has degrees in Marine Science (PhD), Marine Policy (MMA) and Human Ecology (BA).

Janus Welton, founder of EcoArchitecture DesignWorks, PC is an award winning registered Architect in New York and California, a Passive House Designer, LEED Project Manager, Sustainable Building Consultant, Biomimicry Specialist, Educator and a founding member of BIOMIMICRY NYC. She combines Sustainability, Energy Efficiency, Building Biology, and Biomimicry in Architecture, Interior Design, and Planning.  She holds a Master of Architecture degree from the University of Colorado Denver, CO, and a Bachelor of Fine Arts from Virginia Commonwealth University.  Prior to founding EcoArchitecture DesignWorks studio in New York in 2000, Janus served as Director of Concept Architecture for Sony Development, as Senior Designer for Walt Disney Imagineering, and Senior Architectural Designer at Vito Cetta | Randy Washington Group Architects and Planners, all in Los Angeles. Currently, she and her NY EcoArchitecture DesignWorks  team are addressing water and energy issues and incorporating Biomimicry and Living Building Challenge principles (net zero water and net zero energy) in residences and communities. She lectures widely on Sustainable and Biomimicry Inspired Design approaches for solving our most critical environmental issues in the built environment and will focus on Water Issues in her UNSRC SaluS presentation.

She is the co-founder and CEO of Plastic Pollution Coalition (PPC) and a passionate advocate against plastic pollution. PPC is a growing global alliance of nearly 600 organizations, businesses, and notable thought leaders working toward a world free of plastic pollution and its toxic impact on humans, animals, and the environment.

A Los Angeles based visual artist, Dianna has shown her work internationally at galleries, foundations and museums. She uses plastic in her artwork to make a visual and social impact. With plastic bags as her primary material for the past 27 years, Cohen is interested in exploring its materiality through modifications and the material’s relationship to culture, media, toxicity and the world at large and shared this in her TED talk. Dianna studied Biology, Art, and Film at University of California, Los Angeles and holds a BA in Fine Arts.

Yanna Darilis
MEDIA EXECUTIVE, DIRECTOR, TV HOST, FITNESS EXPERT, PEACE & HEALTH ADVOCATE, BRAND EMBASSADOR. Yanna Darilis has been in the Greek media industry for over 23 years having worked on major Greek television channels as an on camera talent, executive producer, writer and director. She is one of the founders and President of the Greek American-Canadian television Channel and news portal, New Greek Television. Highlights of Yanna’s career include Master of Ceremony for the opening and closing Ceremonies of the 2004 Athens Olympic Games, guest host on NBC’s TODAY show and guest host on E Entertainment’s Tara Reid’s Travel Adventures. Her extensive career includes hosting, writing and directing over 85 travel and cooking features on Greece. Yanna is dedicated to the promotion of Hellenism abroad and shares her travel experience on her blog for the Huffingtonpost.com. Her latest project is Host of the PBS Series “Mediterranean Blue”. Yanna is an advocate for peace and living a healthy lifestyle, she volunteers for various causes including The UNSRC SaluS Well-Being Network. Show reel: https://www.youtube.com/watch?v=oSWtQwbEgno